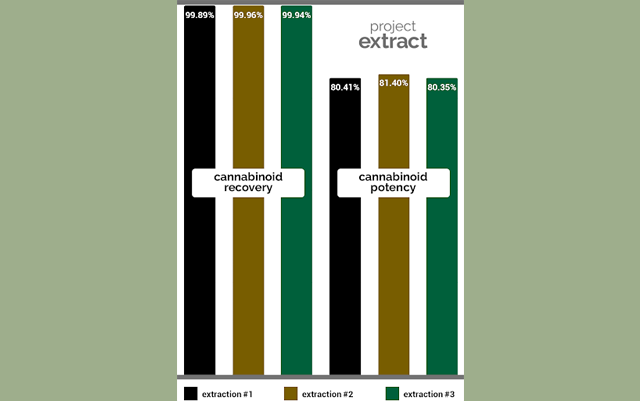 (RTW) technology produces premium, high-quality oil with nearly no loss of cannabinoids straight from the machine during the primary extraction without the use of ethanol.

“There have been a lot of claims made recently regarding the potential of inline winterization, but no one until now has actually backed up those claims with proof,” said Jesse Turner, director of research and development at Green Mill Supercritical. “We think it is important to show our work, so we are releasing this data to demonstrate the dramatic results of our Real-Time Winterization technology. We believe it creates the purest, most cannabinoid-rich oil straight from the machine.”

According to Turner, the company’s RTW technology generates results exceeding those of traditional CO2 extraction technology and creates immense opportunities for increased efficiencies and reduced costs while dramatically reducing risk of losses created by standard winterization processes. A glimpse of the data released includes:

“In any manufacturing pipeline, you have transitions from one step to the next where you risk losing the mass of the total extract or the cannabinoids, and both cost you money in the end,” said Mark June-Wells, PhD, chief science officer at Organic Remedies. “Good extractors will lose maybe one percent at every step, poor extractors as much as five percent. But by removing numerous steps from the whole process and doing just one single extraction, you reduce all that risk to near zero.”

June-Wells explained that Organic Remedies uses Green Mill Supercritical technology to produce its full line of more than 80 different products. He said that additional benefits of RTW include its small overall footprint and that it does not require any changes of extraction processes or parameters, as well as completely eliminating the need to purchase ethanol in addition to other cost efficiencies. For many end-product categories, a full lab is not even necessary since fully de-waxed oil is produced straight out of the machine.

“It is without a doubt the most cost-effective way to meet the demands of our future,” he said. “You avoid all the costs associated with a traditional winterization infrastructure while utilizing an extraction process that minimizes loss at every turn.”

The announcement of Green Mill’s RTW technology in April introduced an entirely new level of performance to the CO₂ extraction industry. The company made public its validation tests measuring results of the RTW process for THC extraction in a full production setting, which confirmed results previously achieved with CBD.

“We believe in the power of this technology and we want to be completely transparent with our customers and others in the industry by releasing as much information as we can about the efficacy of RTW,” Turner said. “We love the innovative spirit that is reigniting the extraction equipment industry and we are excited to hear from others working in the space on their developments, too.”

To that end, Green Mill Supercritical is publishing a complete analysis of its RTW results and data with the launch of Project Extract, an online home for the latest research into the power of supercritical CO₂ as a solvent for cannabis and other botanicals. The mission of Project Extract is to expand the promise of CO₂ by conducting studies and experiments, gathering and analyzing data and developing new CO₂ technologies and methods. Project Extract will seek to collaborate with outside master extractors to help guide the research and gather data. In addition, Project Extract will welcome input and feedback from outside contributors.

“We are determined to help businesses succeed in the high-demand, highly competitive future of cannabis extraction,” Turner said. “And we welcome the scrutiny of the industry and customers. We have been saying it for some time now but it bears repeating that we think there has never been a more exciting or more promising time to be working in CO₂ extraction.”

The Ban on Cannabis Research